Part of the blog-writing duo had the opportunity to travel from Canada to Japan for one short week. During this time, blogger Jennifer Long wanted to explore the question: What are the similarities and differences between ethnography and tourism?

On my second day in Japan, a very generous local offered and allowed me to accompany himself, his family, and another North American visitor on an afternoon shopping trip. Although I had just met this man, we were brought back to his townhouse in the middle of town. As he walked in to tell his wife that we had arrived, we waited outside until slippers were produced and we could walk inside. Once inside, we met their young children as we sipped on ice tea (not like the ice tea we might be used to in North America). From there, the six of us piled into a station wagon and drove to a large mall in the neighbouring townships (Hamamatsu). We spent the next 4 hours walking and window shopping, looking for souvenirs and discussing different things we came across - as per my last post - these things were different in the eyes of a North American - the symbolism and meaning explained to us by our gracious hosts.

I noted the growing acceptance of Hallowe'en in Japanese society to our group and in response, my colleague from the United States mentioned a growing trend of US families taking their children trick or treating (what I thought of as going door to door in one's local area to collect candy from neighbours) to stores in a mall to collect candy. I'd not heard of this trend and we began discussing the effect of building such positive associations with global brands/stores and at such a young age. Walking the mall we saw many shops and restaurants that are also in North America (Old Navy, the Body Shop, KFC, Subway, McDonalds, etc.) and also many new ones (an Anime shop, many unfamiliar clothing stores, and an arcade with a cacophony of noise spilling out).  We also walked through a grocery store where I marveled at the range of available foods, the calling out of not only fish but other food stuff mongers (in what North Americans might identify as a Walmart), and the practice of waiting in line for 4 PM in order to get discounted seafood.

We were treated by our gracious hosts to a Machu green tea smoothie and Takoyaki (octopus balls) - both of which were extremely delicious as long as you don't mind finding octopus arms complete with very small tentacles in the middle of the dough. 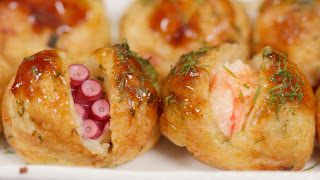 Our hosts ordered and bought these items in addition to buying us gifts of Machu green tea powder to enjoy in North America. This level of hosting is unparalleled in my traveling experience.

On the way back from the mall, we peppered our host with questions about Japanese practices and pronunciation of basic phrasing. Therefore, by happenstance and graciousness, I was allowed insight into not everyday life but 'local life' and by and large I was introduced to the 'hosting practices' (for lack of a better word) of the Japanese.

In 2008, Simoni and McCabe wrote of the kinds of relationships ethnographers can have with their informants; they argued that in the context (spaces or locations) of tourism, "these (often transient) relationships give us access to differing realities and interpretations" (para. 21). They continued on to write that these relationships hindered or provided access to our ethnographic data.

Like my past research experience in the Netherlands, today's excursion felt as though I was gaining insider knowledge (Simoni and McCabe problematize the inside/outside binary) through the graciousness of local informants. I choose that word here rather than interlocutor as what I'm finding is that I'm unable to give much if anything back besides a litany of thank yous. I would argue that my inability to 'give back' or create a more measured if not equitable relationship is one particular difference that comes up when comparing ethnography and tourism, which although not a surprising or new idea, was poignantly felt.

While the purpose of my stay is not research (thus our relationship was only of visitor/tourist and local inhabitant) I have found opportunities to dig deeper than I felt I might have, if I had just stayed with other tourists.

Quick links:
Posted by Jennifer Long at 6:16 AM

Email ThisBlogThis!Share to TwitterShare to FacebookShare to Pinterest
labels & keywords: Anthropological discipline, ethnography, globalization, tourism, what can anthro do?
Newer Post Older Post Home
A collection of writings that speak to the anthropological perspective focusing on examples of public issues that we can better understand if we apply an anthropological lens, what anthros can bring to a workplace, and resources for teaching anthropology in and outside of the anthropology classroom... and everywhere else.