Hallowe'en is a rich holiday for anthropologists to dig into for how it brings together many different social phenomena such as ritual and liminality, layers upon layers of changing tradition, and social justice in questions of cultural appropriation and racism in costuming.

Every year in recent memory, my social media feeds have been chock-full of snappy posts and often well-considered reactions to racist Hallowe'en costumes. While black-face still seems to be a good idea to some (it's not), other groups and cultures also frequently turn up in costume shops and Hallowe'en social events (also not a good idea). 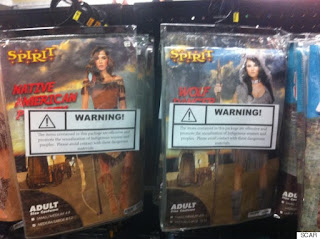 These racist costumes -- like the ongoing use of racist mascots and team names -- have become important public sites for discussion around racism in the everyday, and how these common aggressions are actually part of larger systemic issues. For instance, this year in Canada, costumes parodying Indigenous people have been subject to criticism through public campaigns like this one in Regina, where 'warning labels' were attached to these costumes in a popular seasonal costume store: 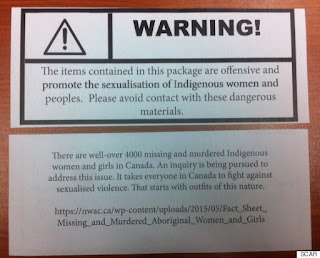 In case you can't read the fine print, this warning label indicated that "The items contained in this package are offensive and promote the sexualisation of Indigenous women and peoples. Please avoid contact with these dangerous materials.
There are well-over 4000 missing and murdered Indigenous women and girls in Canada. An inquiry is being pursued to address this issue. It takes everyone in Canada to fight against sexualised violence. That starts with outfits of this nature."

In the classroom, examining something that may seem frivolous -- such as
Hallowe'en costumes -- can help us to make sense of the much deeper and complex connections between these banal practices and systems of social inequality that are built on institutional racism and colonialism. How are these costumes connected to the broader social and political issues that are daily making headlines at the moment, such as MMIW in Canada, and the North Dakota Access Pipeline in the US? How do these costumes help to shed light on the ongoing processes of systemic violence against Indigenous peoples in North America by our governments and settler-Canadians/ Americans? What are the guidelines for choosing a costume that isn't racist?

Email ThisBlogThis!Share to TwitterShare to FacebookShare to Pinterest
labels & keywords: activism, Canada, colonization, cultural appropriation, ethnocentrism, indigenous peoples, material culture, North America, race & racism, representation, ritual, systemic inequality, USA, violence
Newer Post Older Post Home
A collection of writings that speak to the anthropological perspective focusing on examples of public issues that we can better understand if we apply an anthropological lens, what anthros can bring to a workplace, and resources for teaching anthropology in and outside of the anthropology classroom... and everywhere else.